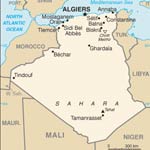 Teaching English in Algeria can be an exciting experience.

An ex-French colony plauged by trouble from 1992-2002, but by 2002 the main guerrilla groups responsible for the trouble had either been destroyed or surrendered, taking advantage of an amnesty program, though sporadic fighting continued in some areas. Much of Algeria is now recovering and developing into an emerging economy with overseas investment in Algeria on the increase.

Education:
The French colonial education imposed on Algeria was designed primarily to meet the needs of the European population and to perpetuate the European cultural pattern. A large majority of the students were children of the colonists. French was the language of instruction, and Arabic, when taught, was offered as an optional foreign language.

Segregated schooling of French and Algerian children was abolished in 1949, and increases in Muslim enrollments were scheduled in the comprehensive 1954 Constantine Plan to improve Muslim living conditions. Out of the total population 70% of 15 year olds and above are literate. The figure is higher for males standing at 78.8% whilst for females it is 61%.[11] The nine-year school system is compulsory, and is attended by most children. It begins at age 6 and continues until age 15.

97% of boys and 91% of girls attend school. Algeria has ten universities and a number of technical colleges, with a population of approximately 350,000 students attending college or university.