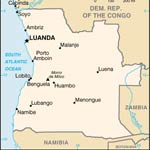 Due to the political and military unrest/unstabililty in Angola, teaching English there is not advised!

Angola is a country in south-central Africa bordering Namibia to the south, Democratic Republic of the Congo to the north, and Zambia to the east, and with a west coast along the Atlantic Ocean.