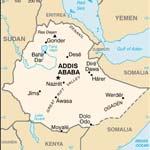 Ethiopia is a country situated in the Horn of Africa that has been landlocked since the independence of its northern neighbor Eritrea in 1993. Apart from Eritrea to the north, Ethiopia is bordered by Sudan to the west, Kenya to the south, Djibouti to the northeast, and Somalia to the east.

Ethiopia has eighty-four indigenous languages. English is the most widely spoken foreign language and is the medium of instruction in secondary schools. Amharic was the language of primary school instruction, but has been replaced in many areas by local languages such as Oromifa and Tigrinya.

Due to the extreme poverty, and remoteness there are limited positions available for the normal EFL teacher. Volunteer/Aid position may be available through NGOs working in the country.