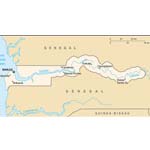 The Gambia, officially the Republic of The Gambia, commonly known as Gambia, is a country in Western Africa. It is the smallest country on the African continental mainland and is bordered to the north, east, and south by Senegal, and has a small coast on the Atlantic Ocean in the west.

With English as it's first language, positions for foreign EFL teachers are very limited.