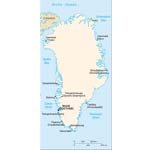 Greenland is a self-governed Danish territory lying between the Arctic and Atlantic Oceans. Though geographically and ethnically an Arctic island nation associated with the continent of North America, politically and historically Greenland is closely tied to Europe. The official languages of Greenland are Greenlandic (Kalaallisut) and Danish, and most of the population speak both of the languages. Greenlandic is spoken by about 50,000 people, some of whom are monolingual. A minority of Danish migrants with no Inuit ancestry speak Danish as their first, or only, language. English is widely spoken as a third language.