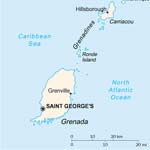 Grenada is an island nation in the southeastern Caribbean Sea including the southern Grenadines. Grenada is the second-smallest independent country in the Western Hemisphere (after Saint Kitts and Nevis). It is located north of Trinidad and Tobago, and south of Saint Vincent and the Grenadines.

The official language, English, is spoken by virtually everyone. But a French Patois (Antillean Creole) is still spoken by about 15%-25% the population. Aside from a marginal community of Rastafarians living in Grenada, nearly all are Christians[citation needed], about half of them Catholics; Anglicanism is the largest Protestant denomination with Presbyterian and Seventh Day Adventist taking up the remainder. Most Churches have denomination-based schools but are open to all. There is a small Muslim population mostly from Gujarati Indian immigrants who came many years ago and set up some merchant shops.

Teaching positions are most likely quite limited for the TEFL/TESOL English teacher in Grenada.