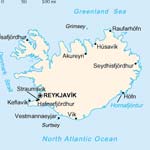 As it's name suggest Iceland can prove to be a very exotic destination for TESOL teachers looking for somewhere different to teach. Iceland, is a country of northwestern Europe, comprising the island of Iceland and its outlying islets in the North Atlantic Ocean between Greenland, Norway, Ireland, Scotland and the Faroe Islands. As of April 2007, it had a population of 309,699. Its capital and largest city is Reykjavík.

The island's spoken language is Icelandic, a North Germanic language. In terms of etymology, the Icelandic language is the closest to Old Norse, the language of the Vikings. Today, the closest language still in existence to Icelandic is Faroese. In education, the use of Icelandic Sign Language for the Deaf in Iceland is regulated by the National Curriculum Guide. The predominant religion is Lutheran. Prominent foreign languages include English, Danish, other Scandinavian languages and German.

For historical and cultural reasons the principal focus in foreign language teaching and learning was for a long time on Danish. In practice, for the last few decades the greatest emphasis has, however, been placed on knowledge and ability in English, despite the fact that English was the second compulsory foreign language taught in the schools until 1999, when it replaced Danish as the first compulsory foreign language. Students receive extensive encouragement to learn English from the surrounding environment, through television, for example, as well as the cinema (films in Iceland are not dubbed), music, the Internet and from the society as a whole.
Other foreign languages lack this out-of-school support and have been given less emphasis, both officially and unofficially, partly as a result of the dominance of English.

There are some TEFL English teacher positions for teachers look hard enough with the majority of these located in the capital Reykjavik.