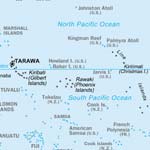 Kiribati, officially the Republic of Kiribati, is an island nation located in the central tropical Pacific Ocean. It comprises 33 atolls dispersed over 1,351,000 square miles (3,500,000 km²) close to the equator.

The people of Kiribati speak a Micronesian dialect called Gilbertese or I-Kiribati, however, English is the official language. English is not used very often outside the island capital of Tarawa. It is more likely that English is mixed in its use with Gilbertese. Older generations of I-Kiribati tend to use more complicated versions of Gilbertese.

Opportunities for teaching English in Kiribati are probably extremely limited and would definetely be restricted to the capital Tarawa.