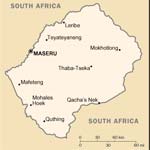 Lesotho is a land-locked country, entirely surrounded by the Republic of South Africa. Formerly Basutoland, it is a member of the Commonwealth of Nations. The name Lesotho roughly translates into "the land of the people who speak Sotho."

Lesotho's ethno-linguistic structure consists almost entirely of the Sotho, a Bantu-speaking people. The Kwena are the largest subgroup of the Sotho; other Sotho subgroups include the Natal (North) Nguni, the Mahlape, and the Cape (South) Nguni (Thembu). The Southern Sotho (Sesotho) and English languages are both official. Afrikaans, Zulu, Xhosa and French are also spoken.

Opportunities for foriegn ESL teachers are non-existant, and if they were available would probably be filled by neighbouring South Africans. Many aid groups work in the country, which may have volunteer positions with some teaching of English involved.