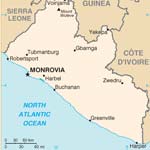 Liberia, officially the Republic of Liberia, is a country on the west coast of Africa, bordered by Sierra Leone, Guinea, and Côte d'Ivoire.

The University of Liberia is located in Monrovia. Opened in 1862, it is one of Africa's oldest institutes of higher learning. Civil war severely damaged the university in the 1990s, but the university has begun to rebuild following the restoration of peace. Cuttington University was established by the Episcopal Church of the USA (ECUSA) in 1889; its campus is currently located in Suakoko, Bong County (120 miles north of Monrovia). According to statistics published by UNESCO for 2004 65% of primary-school age and 24% of secondary-school age children were enrolled in school. This is a significant increase on previous years, the statistics also show substantial numbers of older children going back to earlier school years.

As far as we know teaching opportunities for foriegn ESL teachers are non-existant in Liberia, if you have any information on the contary please let us know.