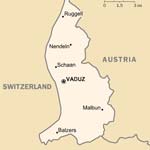 The Principality of Liechtenstein is a tiny, doubly landlocked alpine country in Western-Central Europe, bordered by Switzerland to its west and by Austria to its east. Mountainous, it is a winter sports resort, although it is perhaps best known as a tax haven. Despite this, it is not heavily urbanized (in the way that the Principality of Monaco and Gibraltar are). Many cultivated fields and small farms characterize its landscape both in the north (Unterland) and in the south (Oberland). Not only is it the smallest German-speaking country in the world, but also the only European country whose bordering countries are also landlocked.

The official language is German; most speak Alemannic, a dialect of German that is highly divergent from Standard German (see Middle High German), but closely related to those dialects spoken in neighbouring regions.

With the country being so small and only having a population of 35,000 there are not opporuntities for ESL English teachers to teach in Liechtenstein. Interested teachers should look instead at some of Liechtenstein's surrounding countries.