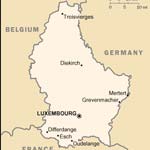 Luxembourg is a small landlocked country in western Europe, bordered by Belgium, France, and Germany. Luxembourg has a population of under half a million people in an area of approximately 2,585 square kilometres (998 sq mi).

Luxembourg lies on the cultural divide between Romance Europe and Germanic Europe, borrowing customs from each of the distinct traditions. Luxembourg is a trilingual country; French, German, and Luxembourgish are official languages.

In addition to the three native languages, English is taught from a young age (mostly eighth grade, i.e. at the age of 13 to 14 years) and much of the population of Luxembourg can speak some simple English, at any rate in Luxembourg City. Portuguese and Italian, the languages of the two largest immigrant communities, are also spoken by large parts of the population, but by relatively few from outside their respective communities.

Luxembourg has a number of Private language schools that teach English, although with so many languages place in front of English in importance, the demad is not as strong as in some other countries.