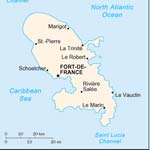 With it's small poopulation, and it's reliance on it's mother nation France, English is not given too much importance on the islands, and in turn you will find it difficult to find any ESL teaching jobs in Martinique.