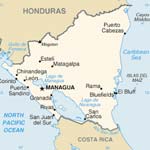 Nicaragua is a democratic republic in Central America. It is the largest nation in the isthmus, but also the least densely populated with a demographic similar in size to its smaller neighbors. The country is bordered on the north by Honduras and on the south by Costa Rica. Its western coastline is on the Pacific Ocean, while the east side of the country is on the Caribbean Sea. Nicaragua is one of three countries in the world where abortion is illegal with no exceptions, along with El Salvador and Chile.

Spanish is spoken by 90% of the country's population. In Nicaragua the Voseo form is common, just as in other countries in Central and South America like Honduras, Argentina, Uruguay and Ecuador. Spanish has many different dialects spoken throughout Latin America, Central American Spanish is the dialect spoken in Nicaragua. The black population of the east coast region have English as their first language.

There are a number of schools in Nicaragua that teach English to the native population and the ex-pat population. Finding positions can be somewhat difficult though, and the pay is fairly low. For the few private English language schools, you would expect to earn anywhere from $1-5 USD an hour teaching, more than likely in the bottom half of that. Teaching private lessons to supplement income somewhat, but as much of the population is not that well of, this is neither high paying or that easy to find.

As for this, teaching English in Nicaragua is not ideal, with the vast majority of jobs in the country being volunteer jobs.