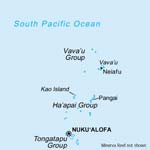 Tonga, officially the Kingdom of Tonga (Tongan for "south"), is an independent archipelago in the southern Pacific Ocean. It lies about a third of the way between New Zealand and Hawaii, south of Samoa and east of Fiji.

Tongans, a Polynesian group with a very small mixture of Melanesian, represent more than 98% of the inhabitants. The rest are European, mixed European, and other Pacific Islanders. There also are several hundred Chinese.

Primary education between ages 6 and 14 is compulsory and free in state schools. Mission schools provide about 83% of the primary and 90% of the secondary level education. Higher education includes teacher training, nursing and medical training, a small private university, a women's business college, and a number of private agricultural schools. Most higher education is pursued overseas.

The Tongan language is the official language of the islands, along with English. Tongan is an Austronesian language which is closely related to Niuean and other Polynesian languages such as Hawaiian and Samoan.