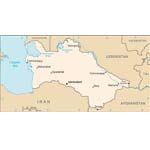 Turkmenistan (also known as Turkmenia) is a country in Central Asia. Until 1991 it was a constituent republic of the Soviet Union, the Turkmen Soviet Socialist Republic. It is bordered by Afghanistan to the southeast, Iran to the southwest, Uzbekistan to the northeast, Kazakhstan to the northwest, and the Caspian Sea to the west.

Since it's split from the unified USSR, Turkmenistan and the rest of the former Russian states have seen a large increase in demand for foriegn English teachers to teach in their country. With the development of the oil indutsry in the area and a higher standard of living acquired by some of the population, there is a strong market of people looking to learn English.

Interested English teacher however face the difficulty of obtaining a visa, which with the heavily beaucratic government process for such things, can prove exceptionally difficuly. Many schools try to go around this, but we very carfeul if you are thinking of teaching there illegally, and the the repercussions it could spell. Definetely make sure that you have done your homework in the visa department, before going.