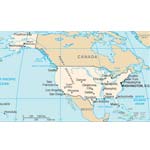 Although the United States has no official language at the federal level, English is the de facto national language. In 2003, about 215 million, or 82 percent of the population aged five years and older, spoke only English at home. English is the most common language for daily interaction among both native and non-native speakers. Knowledge of English is required of immigrants seeking naturalization. More languages are, however, used in daily life. Spanish is the second most spoken language and the most widely taught foreign language. Some Americans advocate making English the official language, which is the law in twenty-five states. Three states also grant administrative status to languages other than English: Hawaiian in Hawaii (where it is granted official status by the Hawaiian Constitution), French in Louisiana, and Spanish in New Mexico (where the languages are not official but are promoted and preserved through several legislative acts).

Teaching in the states is a great option for EFL english teachers not looking at leaving home by far, or for teachers with trouble adjusting to living in some of the more popular places for EFL teachers in Asia, Europe and S.America. The EFL market is a growing one in the USA, and there are an abundance of language schools that are looking for experienced English teachers.

Teaching the US can be a rewarding experience, with many different cultures to meet and teach.