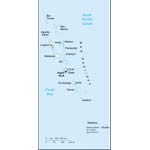 Vanuatu, officially the Republic of Vanuatu, is an island nation located in the South Pacific Ocean. The archipelago is located some 1,750 km (1090 mi) east of Australia, 500 km (310 mi) north-east of New Caledonia, west of Fiji and south of the Solomon Islands.

There are three official languages: English, French and Bislama. Bislama is a pidgin language  and now a creole in urban areas  which essentially combines a typically Melanesian grammar with a mostly English vocabulary. It is the only language that can be understood and spoken by the whole population of Vanuatu, generally as a second language.

Opportunities for ESL teachers in the Solomon Islands are limited to non-existant.