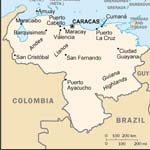 Venezuela, known since 1999 as the Bolivarian Republic of Venezuela (Spanish: República Bolivariana de Venezuela), is a country on the northern coast of South America. The country comprises a continental mainland and numerous islands in the Caribbean Sea. It borders Guyana to the east, Brazil to the south, and Colombia to the west. Trinidad and Tobago, Barbados, Curaçao, Bonaire, Aruba, and the Leeward Antilles lie just north, off the Venezuelan coast. Falling within the tropics, Venezuela sits close to the Equator, in the Northern Hemisphere.

A former Spanish colony, Venezuela is a federal republic. Venezuela holds territorial disputes with Guyana, largely concerning the Essequibo area, and in the past with Colombia concerning the Gulf of Venezuela. There was a Venezuelan Boundary Crisis in 1985. Today, Venezuela is known widely for its petroleum industry, the environmental diversity of its territory, and its natural features. Venezuela is considered a Megadiverse country. Venezuela is among the most urbanized countries in Latin America; the vast majority of Venezuelans live in the cities of the north, especially in the largest metropolis, Caracas. Other major cities include Maracay, Maracaibo, Barquisimeto, Valencia, and Ciudad Guayana. Although living standards are generally rising, Venezuela continues to battle high levels of poverty and environmental degradation. Venezuela is also home to a diversity of wildlife in a variety of protected habitats.

For the TEFL/ESL teacher looking to teach in Venezuela, most positions that are available are in capital Caracas and Valencia, where are more than a few language schools regularly looking for Qualified and experienced English teachers. While qualifications and experience is looked upon favourable, schools are willing to look at hiring just Native English speakers.

Jobs can generally be found all year round. For most positions the teachers are not advertised for Internationally, and you would have a much better head-start if you were already in Venezuela - also it is much more likely you can secure better renumerations and living conditions if the job is found when you are already there. You could try dropping into the centres to discuss a position, or else most other jobs are found by word-of-mouth so ask around.

Make sure you check the current political situation in Venezuela before thinking about traveling there to teach English.