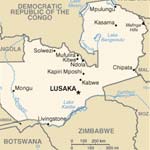 Zambia, officially the Republic of Zambia, is a landlocked country in southern Africa. It borders the Democratic Republic of the Congo to the north, Tanzania on the north-east, Malawi on the east, Mozambique, Zimbabwe, Botswana, and Namibia to the south, and Angola on the west. Formerly Northern Rhodesia, the country is named after the Zambezi river.

Due to the extreme poverty, government unstability and remoteness there are no positions available for the normal EFL teacher. Volunteer/Aid position may be available through NGOs working in the country.