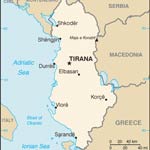 Teaching English in Albania can be an exciting experience. Europe's poorest country and it's only islamic state has 'opened up' to the west in the last 10 years, and there are plenty of opportunities to teach English in a country that is looking to further it's intergration with the west.

One not for profit organisation 'Praktikimi i Gjuhes  LSIA', is helping Albanians to a better life by teaching them English and Computer skills. They hire both Albanian teachers and foreign English teachers.

Country Background:
Between 1990 and 1992 Albania ended 46 years of xenophobic Communist rule and established a multiparty democracy. The transition has proven challenging as successive governments have tried to deal with high unemployment, widespread corruption, a dilapidated physical infrastructure, powerful organized crime networks, and combative political opponents. Albania has made progress in its democratic development since first holding multiparty elections in 1991, but deficiencies remain. International observers judged elections to be largely free and fair since the restoration of political stability following the collapse of pyramid schemes in 1997. In the 2005 general elections, the Democratic Party and its allies won a decisive victory on pledges of reducing crime and corruption, promoting economic growth, and decreasing the size of government. The election, and particularly the orderly transition of power, was considered an important step forward. Although Albania's economy continues to grow, the country is still one of the poorest in Europe, hampered by a large informal economy and an inadequate energy and transportation infrastructure. Albania has played a largely helpful role in managing inter-ethnic tensions in southeastern Europe, and is continuing to work toward joining NATO and the EU. Albania, with troops in Iraq and Afghanistan, has been a strong supporter of the global war on terrorism.