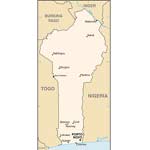 Benin, officially the Republic of Benin, is a country in Western Africa. It borders Togo to the west, Nigeria to the east and Burkina Faso and Niger to the north; its short coastline to the south leads to the Bight of Benin. The official language of Benin is French, with local languages being used as the language of instruction in elementary schools.