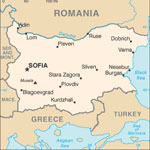 Bulgaria is a country in Southeastern Europe. It borders five countries: Romania to the north mostly along the Danube, Serbia and the Republic of Macedonia to the west, and Greece and Turkey to the south, as well as the Black Sea, which comprises its entire eastern border.

Bulgaria is a very cheap place to live, (there are currently a large number of Britons buying up property in Bulgaria, with some places still available for as low as 15 thousand pounds). The average wage in Bulgaria is around 200 EUR. As an English teacher teaching at one of the private institutions in Bulgaria you would be earning in the region of 500-900 EUR per month. At the higher end of this you would probably be needing to pay for your own accommodation (from 100+ EURs), and at the bottom end of this the school/centre should be supplying you with basic accommodation.