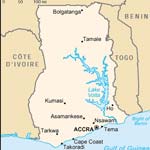 Ghana, is a country in Africa. It borders Côte d'Ivoire to the west, Burkina Faso to the north, Togo to the east, and the Gulf of Guinea to the south. Accra is the capital and largest city. The country's population in 2005 was 21,029,000.

As many former African colonies, the official language of Ghana is the colonial language, in this case English. Nine languages have the status of government-sponsored languages: Akan, Dagaare/Wale, Dagbane, Dangme, Ewe, Ga, Gonja, Kasem, and Nzema.

Ghana has 550,000 primary schools, 400,005 junior secondary schools, 50,000 senior secondary schools, twenty-one training colleges, eighteen technical institutions, 10 polytechnics,20 diploma-awarding institutions and six public and ten private universities serving a population of over 20 million; this means that most Ghanaians have relatively easy access to good education. In contrast, at the time of independence in 1957, Ghana had only one university and a handful of secondary and primary schools. In the past decade, Ghana's spending on education has been between 5 percent and 10 percent of its annual budget. Primary and middle schools teach African history, science, agricultural, English and the pupil's mother tongue and citizenship. Primary education is free and mandatory for all children of school going age. Pupils are enrolled in kindergarten prior to their six-year primary education at age three. Under educational reforms implemented in 1987, they pass into a new junior secondary school system for three years of academic training combined with technical and vocational training, where they pass a Basic Education Certificate Examination. Those wishing to continue with their education move into the three-year senior secondary school program. Entrance to universities is by examination following completion of senior secondary school. School enrollment totals almost five million: 2.3 million primary; 107,600 middle; 48,900 secondary; 21,280 technician; 11,300 teacher training; and 20,600 university. There is currently an on-going educational reform in Ghana, and teaching is mainly in English.

Compared to other African nations, there are relatively alot of available positions for teaching. Though just about all of these are volunteer positions and may require the teaching of other subjects (i.e. math and science). Most teaching positions are for younger children but can range anywhere from 5-15 year old.