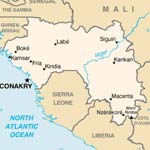 Guinea, is a nation in West Africa, formerly known as French Guinea. Guinea's territory has a curved shape, with its base at the Atlantic ocean, inland to the east, and turning south. The base borders Guinea-Bissau and Senegal to the north, and Mali to the north and north-east; the inland part borders Côte d'Ivoire to the south-east, Liberia to the south, and Sierra Leone to the west of the southern tip. It encompasses the water source of the Niger, Senegal, and Gambia rivers.

French is the official language of France, although ther are probably volunteer positions in the country which include the teaching of English