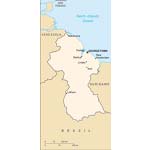 Guyana is the only nation state of the Commonwealth of Nations on the mainland of South America. It is north of the equator but in the tropics and is located on the Atlantic Ocean. Guyana is bordered to the east by Suriname, to the south and southwest by Brazil and to the west by Venezuela.

English is the official language of Guyana. In addition, Amerindian languages (see Cariban languages) are spoken by a small minority and Guyanese Creole (an English-based creole with African and Indian syntax) is widely spoken. While English is the main language, it is spoken with a broken accent. Standard grammar is avoided and a cornucopia of words are substituted.

Volunteer positions teaching English in Guyana are available. One organisation arranging such placements is World Teach: In 2005 Guyana's Ministry of Education (MoE) will sponsor 25 WorldTeach volunteers to teach in public junior high schools scattered throughout the country. Because the local language is English, volunteers will be asked to meet student needs in a variety of subject areas, and have been requested to teach the sciences, geography, and physical education in addition to English. As volunteers participate in the lives of their schools and engage in local communities, they will gain insight into Guyana's culture, economy, and history, and come to understand at close hand the challenges faced by this fascinating and diverse land.