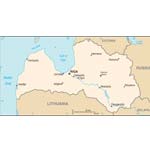 Latvia is a country in Northern Europe. Latvia shares land borders with Estonia to the north and Lithuania to the south  and both Russia and Belarus to the east. It is separated from Sweden in the west by the Baltic Sea. The capital of Latvia is Riga. Latvia has been a member state of the European Union since May 1, 2004.

As with the rest of Eastern Europe the 90's saw the opening of the gates allowing Western culture and the English language to flood in. Native English teachers were in great demand and it was fairly easy to pick up any job just by being a native English teacher. While it has quietened down alot since those days, and most places now require some form of TEFL/TESOL qualification and/or experience, there is still a strong demand and a shortage of English teacher teaching in Latvia.

Latvia is a very cheap place to live, and the wage is quite high for the English teacher when compared to local wages.