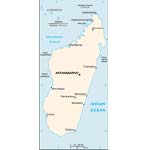 Madagascar, is an island nation in the Indian Ocean, off the southeastern coast of Africa. The main island, also called Madagascar, is the fourth largest island in the world, and is home to five percent of the world's plant and animal species (more than 80 percent of which are indigenous to Madagascar).

The Malagasy language is of Malayo-Polynesian origin and is generally spoken throughout the island. French is spoken among the educated population of this former French colony. English, although still rare, is becoming more widely spoken and in 2003 the government began a pilot project of introducing the teaching of English into the primary grades of 44 schools, with hopes of taking the project nationwide. Many Peace Corps volunteers are serving to further this effort and train teachers. In the Constitution of 2007, Malagasy remains the national language, while official languages are reintroduced: Malagasy, French and English. The motivation for the inclusion of English is to improve relations with the neighbouring countries where English is used.

English teacher positions are limited in Madagascar, most being of a volunteer nature (with NGOs such as the Peace Corps). Although in the future this looks set to change with more people understanding the importance of learning English. Most if any English teaching positions would be in the capital Antananarivo.