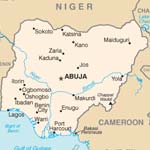 Nigeria, officially the Federal Republic of Nigeria, is a country in West Africa and the most populous country in Africa. Nigeria shares land borders with the Republic of Benin in the west, Chad and Cameroon in the east, Niger in the north, and borders the Gulf of Guinea in the south. Since 1991, its capital has been the centrally-located city of Abuja; previously, the Nigerian government was headquartered in the coastal city Lagos

Health, health care, and general living conditions in Nigeria are poor. Life expectancy is 47 years (average male/female) and just over half the population has access to potable water and appropriate sanitation; the percentage is of children under five has gone up rather than down between 1990 and 2003 and infant mortality is 97.1 deaths per 1000 live births. HIV/AIDS rate in Nigeria is much lower compared to the other African nations such as Kenya or South Africa whose prevalence (percentage) rates are in the double digits. Nigeria, like many developing countries, also suffers from a polio crisis as well as periodic outbreaks of cholera, malaria, and sleeping sickness. As of 2004, there has been a vaccination drive, spearheaded by the W.H.O., to combat polio and malaria that has been met with controversy in some regions. Education is also in a state of neglect, though after the oil boom on the oil price in the early 1970s, tertiary education was improved so it would reach every subregion of Nigeria. Education is provided free by the government but schooling, but the attendance rate for secondary education is only 29% (average male 32%/female 27%). The education system has been described as "dysfunctional" largely due to decaying institutional infrastructure. 68% of the population is literate, and the rate for men (75.7%) is higher than that for women (60.6%)

Beware: As Nigeria is known to be the origin of many scam emails (lotteries, inheritances, job offers, ect that normally require you to send them personal documents or money in return for something else huge later in the future), you need to ere on the side of caution for any contact with Nigerian language schools. If it sounds too good to be true, than it probably is. Do proper research on schools (via the internet, and request their website and emails of former teachers from the school) before sending any personal documents.