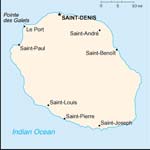 Réunion, is an island, located in the Indian Ocean east of Madagascar, about 200 km south west of Mauritius, the nearest island. Administratively, Réunion is one of the overseas départements of France. Like the other overseas departments, Réunion is also one of the twenty-six regions of France (being an overseas region) and an integral part of the Republic with the same status as those situated on the European mainland.

Réunion is an outermost region of the European Union, and thus the currency used is the euro. In fact, due to its location in a time zone to the east of Europe, Réunion was the first region in the world to use the euro, and the first ever purchase using the euro occurred at 12.01 a.m., when regional council president Paul Vergès bought a bag of lychees at a Saint-Denis market.