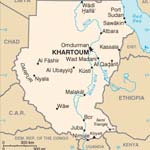 Sudan is the largest African country by area. The country is situated at a crossroads between the Horn of Africa and the Middle East. It is bordered by Egypt to the north, the Red Sea to the northeast, Eritrea and Ethiopia to the east, Kenya and Uganda to the southeast, Democratic Republic of the Congo and the Central African Republic to the southwest, Chad to the west, and Libya to the northwest. It is the tenth largest country in the world by area.

According to the 2005 constitution, Sudan's official languages are Arabic and English. Due to the instablity in Sudan it is not recommend for teachers to seek work in Senegal. Some aid groups work in the country and do have positions that involve the teaching of English in Sudan.