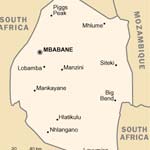 The Kingdom of Swaziland is a small, landlocked country in Southern Africa (one of the smallest on the continent), situated on the eastern slope of the Drakensberg mountains, embedded between South Africa in the west and Mozambique in the east. The country is named after the Swazi, a Bantu tribe. Largely as a result of having the world's highest rate of HIV infection, Swaziland has the lowest life expectancy on the planet, at just 33.22 years.

Swaziland is one of the wealthier nations in Africa, but one of the poorest in the world. Most of the high-level economic activity is in the hands of non-Africans, but ethnic Swazis are becoming more active. Small entrepreneurs are moving into middle management positions.

Yet 70% of Swazis live in rural areas and are being ravaged by drought and a resulting food crisis that threatens hundreds of thousands with hunger. The unemployment rate is approximately 40%, and nearly 70% of the population live on less than a dollar per day. The country has a very low Human Development Index (HDI) development score. Economic growth has wavered in the past few years, exacerbated by the economy's inability to create new jobs at the same rate that new job seekers enter the market. This is due largely in part to the country's population growth rate, which strains the natural resources and the country's ability to provide adequate social services, such as health care and education. Overgrazing, soil depletion, drought, and floods are persistent problems.

Swaziland is much more in demand for aid workers and there are probably no opportunities for teachers wishing to teach English in Swaziland.