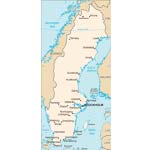 Sweden, officially the Kingdom of Sweden, is a Nordic country on the Scandinavian Peninsula in Northern Europe. Its capital city is Stockholm. It is surrounded by Norway (west), Finland (northeast), the Skagerrak, Kattegat and Oresund straits (southwest) and the Baltic Sea (east). It has maritime borders with Denmark, Germany, Poland, Russia, Lithuania, Latvia, and Estonia, and it is also linked to Denmark (southwest) by the Öresund Bridge. It has been a member of the European Union since 1995.

A majority of Swedes, especially those born after World War II, understand and speak English thanks to trade links, the popularity of overseas travel, a strong Anglo-American influence and the tradition of subtitling rather than dubbing foreign television shows and films. English became a compulsory subject for secondary school students studying natural sciences as early as 1849, and has been a compulsory subject for all Swedish students since the late 1940s.Depending on the local school authorities, English is currently a compulsory subject between first grade and ninth grade, with all students continuing in secondary school studying English for at least another year. Most students also learn one and sometimes two additional languages, the most popular being Spanish, German, French, and Italian.

As Swedes has such a good command of English, most places in the public system are filled by Swedish English teachers, with little need for foreign native English speaking teachers. The are however positions around for converstaional classes and corners etc. and a number of private language schools that are teaching English in Sweden. While there is a fair amount of work around, it can be very up-and-down, with lots of work one work and next to no work the month after. It can be difficult to get steady regular work, and you will need to look at private tutoring as well to balance things out.

Money is very good by comparision to other countries, but you will need to live modestly to save as living expenses can get high is you are used to dining/partying outside.