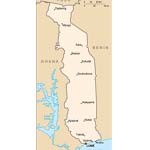 Togo, officially the Togolese Republic, is a country in West Africa bordering Ghana in the west, Benin in the east and Burkina Faso in the north. In the south, it has a short Gulf of Guinea coast, on which the capital Lomé is located.

French is the official language of Togo. The many indigenous African languages spoken by Togolese include: Gbe languages such as Ewe, Mina, and Aja; Kabiyé; and others. With much of it's population living in poverty, most of the English teachers in Togo are there as volunteer workers with one of the aid groups working in the country.