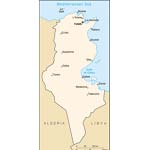 Tunisia is a country situated on the Mediterranean coast of North Africa. It is the northernmost African country and the smallest of the nations situated along the Atlas mountain range. Around forty percent of the country is composed of the Sahara desert, with much of the remainder consisting of particularly fertile soil, and a 1300-km coastline.

Prior to 1958 education in Tunisia was only available to a privileged minority (14%). It is now given an extremely high priority and accounts for 6% of G.N.P. A basic education for both boys and girls between the ages of 6 and 16 has been compulsory since 1991. While children generally acquire Tunisian Arabic at home, when they enter school at age 5, they are taught in Classical Arabic. From the age of 8, they are taught French while English is introduced at the age of 10.

There are a number of private language institutions as well as the British Council located in the capital Tunis. This would probably be the best choices for English teachers looking to teach TEFL English in Tunisia.