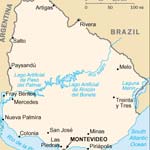 Uruguay, officially the Eastern Republic of Uruguay or the Republic East of the Uruguay (River) is a nation located in the southeastern part of South America. Home to 3 million people, 1.7 million of which live in Montevideo. It is bordered by Brazil to the northeast, the Uruguay River to the west, the estuary of the Río de la Plata (literally "River of the Silver", but commonly known in English as "River Plate") to the southwest, with Argentina on the other bank of both, and finally the South Atlantic Ocean to the southeast. It is is the second smallest independent country in South America, larger only than Suriname it is also larger than French Guiana, which is an overseas department of France. According to Transparency International, it is the second least corrupt country in Latin America (after Chile).

In recent years English is becoming much more a necessity than a luxury and there are many English teaching jobs to be found in the capital of Montevideo. There are dozens of English institutes scattered around the city, and placements are also possible in companies or as a private tutor. Also there may be oppurtunities for the ESL teachers to teach at private companies. Volunteer positions are also available teaching English to the poorer rural areas.