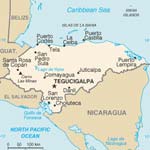 Honduras is a democratic republic in Central America. It was formerly known as Spanish Honduras to differentiate it from British Honduras (now Belize).[1] The country is bordered to the west by Guatemala, to the southwest by El Salvador, to the southeast by Nicaragua, to the south by the Pacific Ocean at the Gulf of Fonseca, and to the north by the Gulf of Honduras and the Caribbean Sea.

The Spanish language is predominant, while (pidgin) English is spoken in the Caribbean Islas de la Bahia Department, but nonetheless is slowly being superseded. Some Indigenous Amerindian languages such as Miskito, Pech, Jicaque, Sumu and Garifuna are also spoken. Spanish is becoming more popular in areas where it was not widely spoken, due to efforts by the government, including making Spanish the language of education.

Most English teaching positions are available for the many NGO groups working in Honduras.