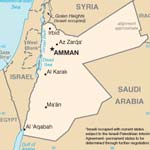 Jordan is an Arab country in the Middle East in western Asia. It is bordered by Syria to the north, Iraq to the north-east, Saudi Arabia to the east and south, and Israel to the west.

The Peace Corps currently send a number of volunteers to serve in Jordan work in their English teaching programme. In collaboration with the Ministry of Education, they work hand-in-hand with Jordanian teachers in secondary schools in rural areas in an effort to develop English language standards with both teachers and students.