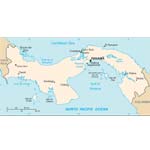 Panama, officially the Republic of Panama, is the southernmost country of Central America. Situated on an isthmus, Panama is a transcontinental nation which connects North America and South America. It borders Costa Rica to the northwest, Colombia to the southeast, the Caribbean Sea to the north and the Pacific Ocean to the south.

There are a number of schools in Panama that teach English to the native population and the ex-pat population, and it should not be too difficult frinding a job teaching English there.