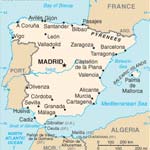 Spain, is a country located in Southern Europe, with two small exclaves in North Africa (both bordering Morocco). The mainland of Spain is bounded on the south and east by Mediterranean Sea (containing the Balearic Islands), on the north by the Bay of Biscay and on the west by the Atlantic Ocean (containing the Canary Islands off the African coast). Spain shares land borders with Portugal, France, Andorra, Gibraltar and Morocco. It is the largest of three sovereign states that make up the Iberian Peninsula  the others being Portugal and Andorra.

Warm weather, seistas, flamenco, the running of the bulls. Spain is a busy tourist destination, meaning there is strong competition for positions in Spain. There are plenty of opportunities for English teachers looking to teach English in Spain. The best time to look for work is either January or September to November. Again with all countries in Europe, EU citizens will have a much easier time finding work in Spain, althoughSpain is a bit easier than most other EU countries for non-EU citizens to apply and get a work visa.

To find work it is best to apply directly to the institutions, it is best to start in the major cities Madrid, Seville or Barcelona as this is where the majority of the jobs are. Many teachers are already in the country when they are hired to, because of this many of the hjob opportunities in Spain never get advertised outside.

Requirements for teaching English in Spain are not too strict, with most schools just requiring a college degree along with some form of English teaching certification (TESOL/TESOL). At private institutions, you will teach around 20-22 hours per week, and get paid anywhere from 625-1000 EUR. Cost of living is estimated at 500-630 EUR with living out of the major cities being much cheaper.