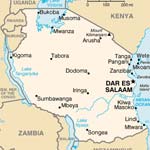 Tanzania is a country in East Africa. It is bordered by Kenya and Uganda on the north, Rwanda, Burundi and the Democratic Republic of the Congo on the west, and Zambia, Malawi and Mozambique on the south. To the east it borders the Indian Ocean.

Each ethnic group has its own language. No language is de jure official, but Swahili is the de facto official national language, used for intertribal communication and for official matters. After independence, English, the language of colonial administration during the era of British rule, was still used for some official issues, and was thus considered de facto official alongside Swahili. As official usage of English has greatly diminished over during the first thirty years following independence, and it was more common to regard Swahili as the only de facto official language. However the political reforms which turned Tanzania away from a closed and socialist environment and a centrally planned economy inevitably resulted in a dramatic opening up of the country. The attendant growth of the private sector and new investment has resulted in English having increasing importance, and there are a plethora of schools in which English is the medium of instruction. Universities all use English as the medium of instruction, which often causes problems for students who have previously only taken English as a subject in school.

The British Council has an office in Tanzania and can help with placements in the country, also there are a number of volunteer outfits which also have positions teaching English in Tanzania.