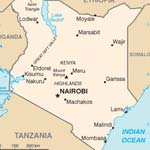 Kenya is a country in Eastern Africa. It is bordered by Ethiopia to the north, Somalia to the northeast, Tanzania to the south, Uganda to the west, and Sudan to the northwest, with the Indian Ocean running along the southeast border. English is one of the official language in Kenya.

Kenyas education system consists early childhood education, primary, secondary and college. Early childhood education takes at least three years, primary eight years, secondary four and university four or six years depending on the course. Preschooling, which targets children from age three to five, is an integral component of the education system and is a key requirement for admission to Standard One (First Grade). At the end of primary education, pupils sit the Kenya Certificate of Primary Education (KCPE), which determines those who proceed to secondary school or vocational training. Primary school age is 6/7-13/14years. For those who proceed to secondary level, there is a national examination at the end of Form Four  the Kenya Certificate of Secondary Education (KCSE), which determines those proceeding to the universities, other professional training or employment. The Joint Admission Board (JAB) is responsible for selecting students joining the public universities. The minimum university entry grade is C+ at KCSE. However, due to stiff competition, only those with higher grades such as B+ and above are guaranteed admission. Private universities admit students on their own but are guided by the rules and regulations provided by the Commission for Higher Education. Other than the public schools, there are many private schools in the country, mainly in urban areas. Similarly, there are a number of international schools catering for various educational systems such as American, British, French, German, Japanese and Swedish.