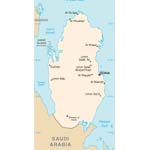 Qatar is an emirate in the Middle East and Western Asia, occupying the small Qatar Peninsula on the northeasterly coast of the larger Arabian Peninsula. It is bordered by Saudi Arabia to the south; otherwise the Persian Gulf surrounds the state.

Expatriates form the majority of Qatar's residents. The petrochemical industry has attracted people from all around the world. Most of the expatriates come from South Asia and from non-oil-rich Arab nations. Because a large percentage of the expatriates are male, Qatar has the most heavily skewed sex ratio in the world, with 1.88 males per female

In recent years Qatar has placed great emphasis on education. Along with the countrys free healthcare to every citizen, every child has free education from kindergarten through to university. The country has one university, the University of Qatar, and a number of higher educational institutions. Additionally, with the support of the Qatar Foundation, some major American universities have opened branch campuses in Education City, Qatar. These include Carnegie Mellon University, Georgetown University, Texas A&M University, Virginia Commonwealth University and Cornell University's Weill Medical College. In 2004, Qatar established the Qatar Science & Technology Park at Education City to link those universities with industry. Education City is also home to a fully accredited International Baccalaureate school, Qatar Academy.

With business and a large population of ex-pats, learning English is important to locals of Qatar. However even though English is taught as a second language in the public schooling system, it is still quite rare to find native English speakers teaching here.

There’s a large number of private schools in Qatar, catering mainly for the needs of the expatriate population. English is generally the language used for all lessons. There are some French schools, which hold lessons in that language, but these usually also teach English.
There are many private language schools in Qatar as well as international schools that teach in English catering to the Ex-Pat population. Some of the foreign insitutions with centres in Qatar include Berlitz, Linguarama, and also the British Council are prominent with centers teaching English in Qatar. In just as strong demand as English classes, private tutoring/lessons are also very popular.

Most schools in Qatar require a college degree, with TEFL/TESOL certification and ESL teaching experience looked on favourably and required in many instances. The best time to look for English teaching work in Qatar is either January or September. Once you have a job teaching English in Qatar conditions are good with the teaching week around 25 hours per week. Wages per month for working this teaching week are quite high at around 6,700-9,000 KWD (around $1,850-$2,475 USD), teaching English in Qatar you should definetely be able to save quite a bit of money, with living expenses quite low at around 1,000-2,500 KWD ($275-690 USD) per month.