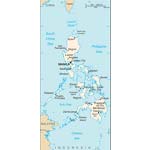 The Philippines is an island nation located in Southeast Asia, with Manila as its capital city. The Philippine Archipelago comprises 7,107 islands in the western Pacific Ocean east of Vietnam. The country reflects diverse indigenous cultures from its many islands as well as European-American influence from Spain, Latin America and the United States.

More than 170 languages and dialects are spoken in the country, almost all of them belonging to the Borneo-Philippines group of Malayo-Polynesian language branch of the Austronesian language family. According to the 1987 Constitution, Filipino, and English are both the official languages. Many Filipinos understand, write and speak English, Filipino and their respective regional languages.

Phillipines population have a very high level of English for an Asian country. Children are taught English since birth and throughout school.

Positions are non existant in the public schooling system with local teachers able to teach fluent English, if you were looking to teach you it would be similar to finding a job back home as a teacher (provided you had visas taken care of), you would be required to have a Ma in Education and years experience teaching in government schools.

There are however a number of private language schools in Phillipines, most of them situated in the capital Manila, but they are also found in other major cities.Although you may very well find most of your students are not Filipino but rather international students (i.e. Korean or Japanese), who come to Phillipines to study English and take advantage of the very cheap tution fees compared to at home.