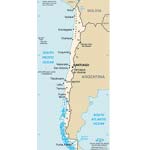 Chile, officially the Republic of Chile, is a country in South America occupying a long and narrow coastal strip wedged between the Andes mountains and the Pacific Ocean.

For the TEFL/ESL teacher looking to teach in Chile, most positions that are available are in capital Sntiago, where are a dozen or more language schools regularly looking for Qualified and experienced English teachers. While qualifications and experience is looked upon favourable, schools are willing to look at hiring just Native English speakers.

The best time to look for teaching positions is around the end of February, which is around the beginning of the new school year (start of March). The summer months from Dec- Feb can be considered the most difficult times to find a position as these are the holiday and vactioning months. For most positions the teachers are not advertised for Internationally, and you would have a much better head-start if you were already in Chile - also it is much more likely you can secure better renumerations and living conditions if the job is found when you are already there. You could try dropping into the centres to discuss a position, or else most other jobs are found by word-of-mouth so ask around.

Many schools have a trial period for new teachers - which comprises of teacher training, this is more than likely unpaid. Once you start proper teaching expect a salary of around 200.000 to 400.000 peso pre month, this equates to $400-500 USD per month. You wil probably not be able to save that much, but renumeration is still much higher when comparing with average local wages, and can be supplemented by private lessons on the side.

Most schools have a two- to three-week unpaid training program. Salaries range from 300,000-450,000 pesos per month (approximately $400-$500). You won’t be able to afford many luxuries in addition to travel, but it's not an uncomfortable wage. Some institutes provide basic insurance; other benefits are rare.