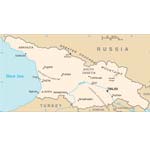 Georgia is a country to the southeast of Continental Europe at the east coast of the Black Sea. It is bordered on the west by the Black Sea, on the north by Russia, on the south by Turkey and Armenia, and on the east by Azerbaijan. Georgia has a rich history and culture which stretches back to prehistoric times. The classical antiquity saw the rise of the early Georgian states of Colchis and Iberia, which laid foundation to the Georgian culture and statehood. In 1008, Iberia incorporated Georgian speaking Kingdoms and Principalities and formed a unified Georgian Kingdom during the reign of Bagrat III. In addition, Iberia recognized Christianity as a state religion in 327, making Georgia one of the oldest Christian nations in the world. The Bible was consequently translated into Georgian in the 5th century AD. Additionally, the Georgian language has its own distinct alphabet, making it the sole language within the Caucasian Language Family to have an alphabet of its own.

Georgia is a very cheap place to live, and the wage is quite high for the English teacher when compared to local wages.