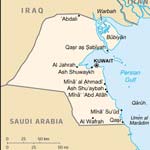 Kuwait is a small constitutional monarchy on the coast of the Persian Gulf, enclosed by Saudi Arabia to the south and Iraq to the north. It can be a good place for teacher looking to teach in the middle-east, and especially women, with Kuwait having the highest employment rate for women than any other country in the Persian Gulf, although women may still find it difficult with preference given to male applicants.

Oil revenues have allowed Kuwait to build an extensive educational system, yielding a literacy rate of 90 percent. There are a lot of private schools in kuwait, including the Fahaheel Al-Watanieh Indian Private School, Indian Community School, Al-Bayan Bilingual School, Carmel School, The British School of Kuwait, The Gulf English School, The American School of Kuwait, American Creativity Academy, The English School amongst several others. All private schools offer different and competitive programs, and whilst each school strives to be the best at private education, different parents and expatriates prefer different private schools naturally. Public schooling is free and compulsory from the age of 5 to 18, and several private schools also teach this age group. Kuwait University is Kuwait's only public university, but has a prestigious reputation in the Middle East. The medical school, in particular, provides up-to-date training for students. Both the extensive library system at Kuwait University and the collection at Kuwait National Museum (1957) were heavily damaged and looted during the Iraqi occupation in the 1991 Persian Gulf War. The up-to-date list of the private universities/colleges is: AUK (American University of Kuwait), GUST (Gulf University for Science and Technology), ACK (Australian College of Kuwait)[Name soon to be changed to The Tazmanian University of Kuwait], and AOU (Arab Open University).

With business and a large population of ex-pats, learning English is important to locals of Kuwait. However even though English is taught as a second language in the public schooling system, it is still quite rare to find native English speakers teaching here.

There’s a large number of private schools in Kuwait, catering mainly for the needs of the expatriate population. English is generally the language used for all lessons. There are some French schools, which hold lessons in that language, but these usually also teach English.
There are many private language schools in Kuwait as well as international schools that teach in English catering to the Ex-Pat population. Some of the foreign insitutions with centres in Kuwait include Berlitz, Linguarama, and also the British Council are prominent with centers teaching English in Kuwait. In just as strong demand as English classes, private tutoring/lessons are also very popular.

Most schools in Kuwait require a college degree, with TEFL/TESOL certification and ESL teaching experience looked on favourably and required in many instances. The best time to look for English teaching work in Kuwait is either January or September. Once you have a job teaching English in Kuwait conditions are good with the teaching week around 25 hours per week. Wages per month for working this teaching week are quite high at around 550-700 KWD (around $1,800-$2,400 USD), teaching English in Kuwait you should definetely be able to save quite a bit of money, with living expenses quite low at around 80-210 KWD ($275-725 USD) per month.